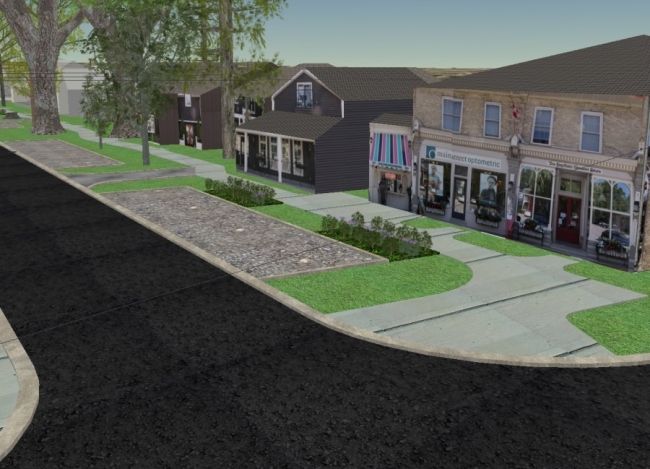 Main Street North in Bayfield has insufficient drainage outlet and the road is in need or reconstruction. The Municipality of Bluewater contracted BMROSS to undertake the engineering for improved infrastructure and prepare a design for the streetscape. In addition to the standard pre-engineering survey, base map creation and design preparation, the Municipality wanted additional public input for the project.

Main Street is a popular tourist attraction due to the atmosphere of a small town and that it has maintained architectural heritage. There are varied retail shops and a number of eating establishments and inns. There is a goal to maintain this atmosphere after the road reconstruction and a local committee was formed to provide feedback on some of the design elements.

A difficulty in this type of project is trying to accurately represent the streetscape post-construction, so that the mental image formed by residents is not varied, and that they have not been filling in any of the gaps on their own. BMROSS prepared 3D visualizations and an animated video of the major design elements to guide the decision making process. Special attention was placed on road side trees, alternative storm water management structures, and overhead utilities. Due to the uniqueness of the buildings, it was necessary to represent the real facades of the historic buildings to create the correct mood, and to help give orientation to the viewer.

A number of steps were required to create the images and video, with the bulk of the work and final visualization being competed in a GIS, using ESRI’s recently released software named ArcGIS Pro. The initial design prepared in AutoCAD was imported into the GIS, and married with GIS data such as aerial photography and ground topography. Elements such as the extruded utility poles and hydro wired created using the 3D representation tools of ArcGIS Pro. The buildings and real facades of the shops and inns were created in a 3D drawing program and imported into the GIS.